This Page is a Cheat Sheet for Linux. I have collected Info. from the internet and listed it here for easy access for me. If you find it useful then great!

The MOST Important Things to know!

” Everything in a file! ” Even your hardware! e.g. So when you play a movie it is moved into the Monitor file & Speaker file. Your just moving data from 1 file to another!. (This simple fact helped me understand how it all worked)

The following illustration shows the architecture of a Linux system − 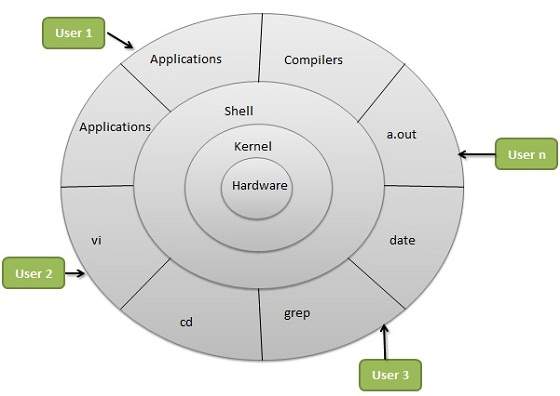 The architecture of a Linux System consists of the following layers − 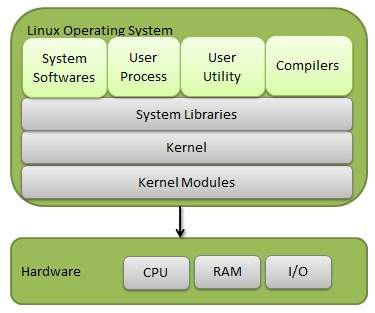 Kernel component code executes in a special privileged mode called kernel mode with full access to all resources of the computer. This code represents a single process, executes in single address space and do not require any context switch and hence is very efficient and fast. Kernel runs each processes and provides system services to processes, provides protected access to hardware to processes.

Support code which is not required to run in kernel mode is in System Library. User programs and other system programs works in User Mode which has no access to system hardware and kernel code. User programs/ utilities use System libraries to access Kernel functions to get system’s low level tasks.

Following are some of the important features of Linux Operating System.

Custom Kernels are also called micro-kernels, they are striping down versions of the full Kernel with everything you don’t need removed and only the hardware drivers needed.

A perfect example of this is the Raspberry Pi

Here is a guide for you. I always watch his videos,

Another Kernel for Gamers & Streamers is XANMOD.

It’s a gaming Kernel, it fine for everyday workloads but with gaming & streaming is optimized.

Libraries are short scripts/programs that are used “in” other software. e.g.

Pick any program that has a menu. The menu (it has File, Edit, View, Options & Help.) Because Linux is open source, you can read the software! Most software would have the same code for there menu or very similar, so why code more than you need too. That’s where Libraries come in! Think LEGO for coders.

This makes coding faster on Linux. Less mistakes too and stops security issues from coming up. “OPEN SOURCE”

This “Libraries usage” extend into Drivers & Basic OS functions too. The Kernel is basically a collections of Libraries with priority assigned to them(Who gets processed first).

In Windows it’s “closed source” so each and every piece of software must be complete and you download the complete software on every update.

In Linux only the code that has to be updated/changed gets downloaded. As most of the program are Libraries only the main code that points to each library needs updating. This makes updating fast and small.

If you can think of 2 separate software on Linux that has the “same fetchers” odds are there is a Lib file or soon will be.

In Short Lib’s are “Common code that doesn’t change” that are used by many other programs.

This is why Linux is so small! (Linux iso size 2Gb(with all software) vs Windows 10 iso 8Gb!) 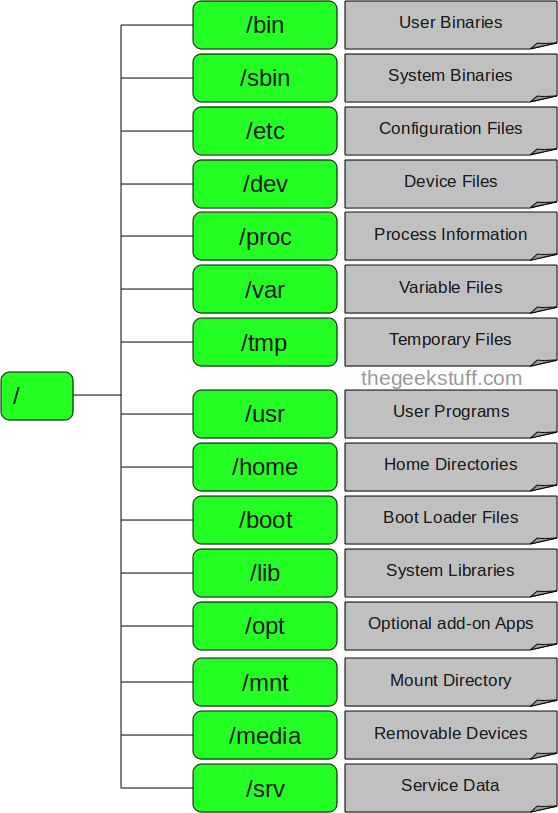 The file system is the same for all Linux/Android systems, no matter how big or small they are! But How!?! Right!

A OS is not Installed on a Hard-drive, it is installed on a Partition. A Partition can be made up of several drives like in a RAID. Your BIOS of your computer points to a hard-drive that has a Bootable Partition = MBR or GPT. This then boots the OS Partition.

The hardware (hard-drives) & File structure are separate because of Partitions!

Think of C:/ on windows as Root (/). In Windows you can add a hard-drive as an extended partition(a folder on C:/) but if the original hard-drive dies then it’s dead too which is why it is generally given the D:/ and a shortcut is used.

Linux is designed for expansion. Expansion while the machine is still running(Servers). Each folder can be moved to a new “Partition” while running & then the “daemon” can be reloaded for fstab (the file system software).

“ROOT” (/) & all software can be on a Very Fast but Small NVMe drives partition saving money and have “/Home”(Where your user data is stored) on a Huge slower spinning hard-drives partition or RAID’s partition!

Remember Linux was made for Universities & Businesses where there are hundreds of users. Which is why there are 2 types : ADMIN vs USER.

This is also why your tweaks to programs are stored in your /Home folder too. Each user can tweak the same software but those “tweaks” only affect that user. Only a Admin account can make system wide changes like installing software.

Learning Linux by building it!

If you want to really get into Linux, the only real way is to build it. Now there are 2 ways. Gentoo or Actually building Linux from scratch.

Which one should you do? First! Well that’s an easy one! Gentoo.

After if you really want to learn how everything, I mean everything works. Build your own!

I personally have not done this as I’m just a “User”! & I don’t care how it works just that it does! I Know I should but….. I don’t need to know how to bake a cake to be able to eat it! If you want deep knowledge of Linux these 2 are your best bet, and after your learning bug is satisfied you can join me on Kubuntu! LOL

Here is a video on KDE & it explains it all. KDE NEON might be a better fit for you!

But which Linux to Choose?

From the diagram you can see that there are many different distributions of Linux, in fact there are thousands and each one is unique. But that’s a longer story, and for another time!

The distro. that we are interested in is Debian.Why?

Debian is considered the grand father of Linux because it has been around from just about the beginning. It is a slow and stable distro. and so a lot of other distro.’s are based on it, like Ubuntu. (But the most important os is SteamOS. Steam has made Industry standards for game developers making Linux compatable for AAA games.)

Ubuntu is backed by a company called Canonical. There main focus is business software like servers and IOT devices. The desktop is a side business for them. So what’s different? PPA’s & SNAP’s…. How software is installed. We will get into installing software later.

Unlike Apple or Microsoft that only have one desktop environment Linux has many, like – Gnome, KDE, LXqt, LXde, XFCE, i3, Mate, Cinnimon, budgie etc, etc. With each one being slightly different from the other.

Here is a site that has them all! “Distro Hopping” is a favorite past-time for every Linux user. Finding the right Linux for the job & hardware is always fun. The reason I have Guided you the Debian side is Help websites. Most will reference Ubuntu so it’s a great place to start! Have fun!

To view the permissions for files and directories, use the ls -l or ls –n commands.

There are three permissions groups:

The table describes the permission groups and their scope:

Every file is owned by a specific user (or UID) and a specific group (or GID). The chown command can be used to change just the user, or the user and group of a file. Here is an example of changing the owner of file test to user and its group to user.

The basic format for the chown command is as follows:

An alternate command to change only the group of a file is the chgrp command. For example:

The chgrp command is commonly used by normal users to change the group ownership of their files. The chown command is normally used only by the root user.

Each user can be a member of many groups (listed in the /etc/group file under several groups). Only one group will be a user’s primary group (listed in the user’s entry in /etc/password). When a user creates a file, by default the file will be owned by the user’s primary group. If they want the file to be owned by one of their other groups, they must use the chgrp command to modify the group membership. For Example :

As shown above the newly created file (file) automatically gets the group as “user”.

Below is sample output from ls -l command; you can see from the first character of each line that dir1 and dir2 are directories (indicated by the d) and that file1 and file2 are a regular file (indicated by the –).

The next nine characters show the file’s permissions for user, group, and others (or everyone else) as shown below, with parentheses added for clarity:

Permissions can also be represented numerically:

Add each section so that the permissions of the file meta (from the example above) would be 664. Here is another way to look at how we come to that number:

Adding the numbers in each section results in permissions of 664.

File permission can be represented in a numeric or symbolic format.The permission number can consist of three or four digits, ranging from 0 to 7.

When 3 digits number is used, the first digit represents the permissions of the file’s owner, the second one the file’s group and the last one all other users.

The write, read, and execute permissions have the following number value:

When the 4 digits number is used, the first digit has the following meaning:

The next three digits have the same meaning as when using 3 digits number. If the first digit is 0 it can be omitted, and the mode can be represented with 3 digits. The numeric mode 0755 is the same as 755.

To view the file’s permissions in the numeric (octal) notation, use the stat command:

Setting 777 permissions to a file or directory means that it will be readable, writable and executable by all users and may pose a huge security risk.

For example, if you recursively change the permissions of all files and subdirectories under the /var/www directory to 777, any user on the system will be able to create, delete or modify files in that directory.

File ownership can be changed using the chown command and permissions with the chmod command.

Let’s say you have a PHP application on your server running as user “linuxize”. To set the correct permissions you would run:

Only root, the file owner, or user with sudo privileges can change the permissions of a file. Be extra careful when using chmod, especially when recursively changing the permissions

Or, to add read and write permissions for the group that owns the file, you would run:

Instead of adding permissions, the symbolic syntax of chmod can also be used to subtract or set to some absolute value as shown in these examples:

Adds the setuid bit so that, if executable, this file will execute with the permissions of its owner.

Adds the setgid bit so that, if executable, this file will execute with the permissions of its group. When this is set on a directory, all files created in the directory will have the same group as the directory.

Adds the sticky bit so that users can only delete files from this directory that they created.

You should understand “system software”,”user software”, Who has permissions to all files for reading, writing & execution. & How to install software for users.

There is you the owner “User”, group for your files is normally you too.

But there are system files so group “Sudo” needs access to execute a system program. & groups for each part of the OS , sound, USB, graphics etc etc …. All with permissions creating more security!